If you are following my blog, you have probably already realized my “restaurants to try” approach. I have a “to do” list with new openings and restaurants I have never been, but it often happens that if I don’t visit a restaurant immediately after the opening, I loose a bit of interest, as I have the impression my readers will not be extremely reactive, considering there might have been written already enough on the subject.

It was the case of Ukelele, this Thai corner located in Clausen, just off the Rives. I wanted to try it so much as soon as it opened, I lost the moment, for one reason or the other, and then everybody was so much talking about it that it went at the bottom of my “next restaurant”. What could I added if a general public idea is already wide-spread?

I love Thai food indeed and I tend to stick to ordering delivery from Bangkok Thai at the station – the place is a bit dodgy (sorry!), but the food is authentic and well priced, compared to other Thai restaurants I have tried in the city (not the time to mention now, but you can easily find in my reviews).

So – I have almost forgot about Ukelele, when my boyfriend decided to surprise me with a reservation that read “I passed there in front, I liked it and I pop in for reserving”. I could not say no: first of all, because generally speaking I am the one in charge of restaurant reservation in our family and therefore it came pretty much as a shock (no offense intended, just the fair truth 🙂 ). Second, because normally M. is very picky concerning food – and as much as he can eat his Delirio Culinario pizza with gorgonzola and salami at least three times per week, he is totally unmotivated regarding exotic cuisine. So – I told myself, why not.

I got to Ukelele a bit earlier than him and the place was half-busy. I gave my name at the counter and I was indicated two tables on the main street side. There were actually three tables available in total – one in the corner with two chairs and two on a bench. I wanted to be on a chair but I was told to choose between the other two.

I ordered a Thai Tonic while I waited for M. to arrive and I was given the menu. He got there from work with his usual delay and, little by little, the restaurant got really packed.

He also had a Gin to start with and we ordered. We went for a mixed starter to share, I follow with a basil beef, while he had red curry chicken. We concluded with espresso and cognac.

After the pictures of our dinner, you will find my thoughts about Ukelele – and yes, I know lots have been written already, so these are just my two cents. 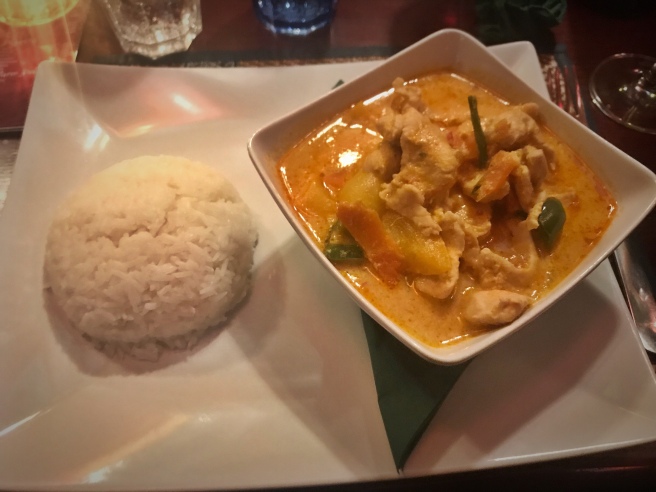 What I liked about Ukelele:

What I liked a bit less about Ukelele:

To sum up: Ukelele is a lovely Thai restaurant in Clausen. The location is very unique and warm and the atmosphere is casual, with a friendly service. Food is on point and prices are fair. My recommended dish would definitely be the basil beef, if you like spicy food. Perfect for a night out with friends. Reservation needed – in advance for the week-end.