This was for me the most waited opening of 2018 – you know why? As I live just nearby and when I saw “tequila bar opening soon” my heart started giggling – LOL.

So when finally Agave opened its door last month, it jumped at the top of my place to try – and my dear friend Jenni came to support me – never seen she left me drinking alone one week-end.

We booked for Halloween night – and I recognize now, it might not have been a great idea as first try, therefore my review should be read in consideration of the above.

We got there around 8ish and the place – that is kind of small – was already packed. I was immediately surprised to note how they did a great job to chance completely its appearance compared to its predecessor (“I Quattro Mori“, that now moved to Esch/Alzette). The restaurant now is colorful, bold, joyful. Remind me of this tequila bar just off the harbor in Isla Mujeres that was serving giant Margaritas – I definitely need some Caribbean vacations I did not take this year!

Anyway – as said, we got there and it was very full. We had our table and we were given menu card. Now, as usual, we started with the idea of limiting our choices as we wanted to “go out” after. We ordered, in the meanwhile, two frozen margaritas, classic, and went after for two starters and one main to share. As starter we had nachos with guacamole and shrimps ceviche, followed by shrimps tacos.

Our wait was the longest I remember in a while and when we were almost done with our second drink and I started feeling tipsy, we checked for our food. Finally, after 5 minutes, it arrived, all together.

As we were pretty in a hurry to get downtown later, we skipped the coffee and the tequila – we actually had them at my place while waiting for our cab 🙂

Pictures of the dinner followed by my first impressions about Agave. 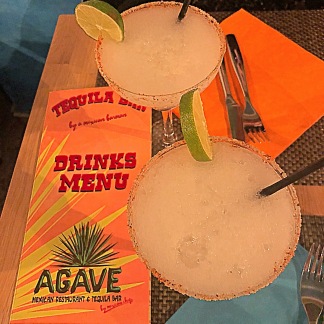 What I liked about Agave:

What I liked a bit less about Agave:

So – in conclusion: Agave is a new Mexican restaurant at the very end of rue de Hollerich. Decorations are colorful, drinks amazing and food tasty. The place has been opened for less than one month, therefore there might be still room for improvements (for us, the waiting time ). It is a vibrant place with a different kind of cozy atmosphere and I would definitely visit it again on a calmer night to taste other items off their interesting menu list. Strongly recommended for a night out with friends.