Being living in Luxembourg for 10 years, I think I have visited most of the places that are considered as an “institution” in the country. Some of them, I really like, some of them to me are just traps for old Luxembourgish chicks. I am always giving them a chance, anyway, every couple of years, so it was the case of Brasserie Guillame today, when it happened to be in the city centre around 1.30 pm and we wanted to have a relaxed lunch outdoor.

We noted couple of tables available on the terrace and we waited at the entrance. Two waiters passed in front of us and did not even bother to say hi – being busy does not exclude being polite. We got to stop a third one that accommodated us on a tiny table on side.

Allocation of the space is crazy: you basically eating together with your next two neighbours and cannot even move an inch that also the next two tables move – good luck if they have to leave while you eating.

Waiter arrived again, gave us the menu and ask for an aperitif: yes, please, we said. And ordered a Campari soda and a Hugo.

Open the menu and just realized how crazy prices are – if you follow the blog you probably know I am very keen of spending my money in food and booze, but 34 euro for a tuna carpaccio, really? You pay the location, hubby said, and he was probably right, but I was still supposing I was going to eat well – poor little dreaming girl.

So while the table next to us finished the apero, had main, ordered wine and wine arrived, our aperitif were nowhere to be seen. Waiter came to take our order and I politely asked him if we were not supposed to have our drinks during our 15 minutes wait to see him again. Drinks arrived 5 minutes after he took our order. Hugo was nice to be seen but completely watered down.

Food arrived: hubby had a beef carpaccio with basil and roquette, while I went for a beef tartare. One small portion of fries was “to be shared”, as described by the waiter. Salad was so ugly I just pretended it was not on the table. I had a glass of rose’ that was likely to be coming from Lidl wine paper boxes.

I was starving and generally speaking you see I am not a picky girl – I eat almost everything. But that tartare it was one of the most disgusting thing I had in a while. It was so full of mayonnaise and mustard it was almost impossible to taste the meat. After two forks, the only things I was able to taste were pieces of cartilage I took in the middle of the mess (calling it dish it is definitely too much). I left it all on the plat – another thing I usually never do.

I ate all the fries, as I was hungry, and the waiter came and asked if we wanted more. Yes please, we said. After 20 minutes, again, fries were nowhere to be seen – I ordered my coffee and hubby had finished his carpaccio and had his dish removed. There, together with the coffee, came the fries.

As side note, if a customer is leaving a course totally on the dish, it is good thing asking him/her if he/she did not like the plat and if anything could have been done differently. Apparently this is not happening at Brasserie Guillame and my dish was taken from the table without – beg my pardon – giving a fuck about the fact I did not eat it all.

Ca va sans dire, they will not see me again – and still trying to wonder what people find attractive in this place. 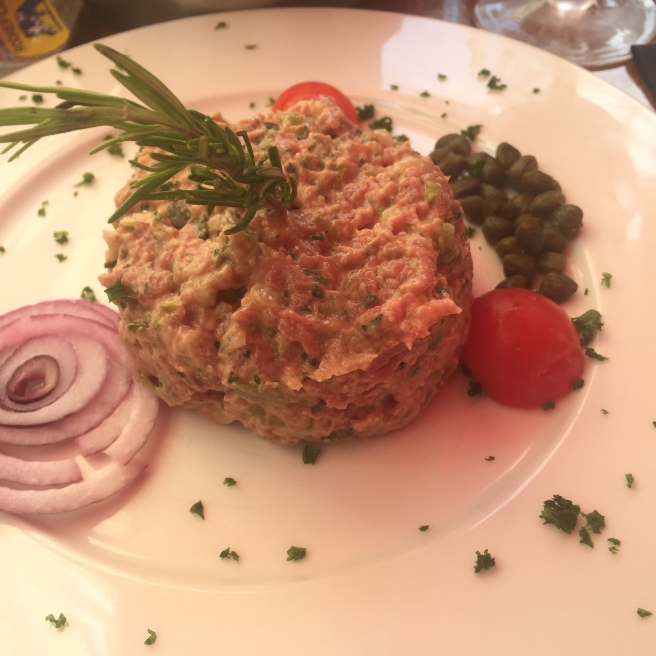 6 thoughts on “Brasserie Guillame, Luxembourg city, aka: how to ruin your Sunday”