Happy Monday! Another week has just started and I though it would have been a good idea, instead of fishing into my still pretty deep backlog, to inaugurate it with a brand new restaurant review. I posted some updated on my IG account during / after my visit at Skybar restaurant and bar and I received so many questions I felt very motivated to write this morning, despite a cold and unproductive week-end.

The opening of the new Skybar restaurant and bar was highly anticipated by a very mysterious social media campaign. A website was in place already couple of months ago, together with the possibility to reserve a table starting from November 15th, the day of the official opening. Pictures were very limited until the opening day, referring just to few interior design details, and they were no indications regarding the menu card or what kind of the food to expect. This was enough to make me very excited and to book my table for the day after the opening as soon as bookings were possible!

The Skybar is part of the new extension of City Concorde mall in Bertrange, not exactly in the city center, but still easily accessible by car and by bus (bus n. 6 from Gare Rocade / Hamilius taking around 15 minutes from the latest, off-peak hours).

As I really did not know what to expect, we reserved at 7:30 and, at that time, the mall shops were still opened and packed, so it was a bit awkward getting in fully dressed up. Once out of the elevator that is leading you to the second floor, the situation totally changed. The Skybar welcomed us with dark and wide windows on the floor and a crowd of curious people trying to spot what inside.
The atmosphere, there, was sophisticated and cosmopolitan, definitely reminiscing of an upscale lounge in a European bigger capital. I loved the contrast between the baroque bar at the entrance and the huge, linear kitchen on display at the end of the room. Space between the tables is more than fair and we were accommodated to one on the second row. Do not expect Heron Tower view – the issue here is not how tall the building is, but mainly that outside is very dark. The view should be amazing during the day. The space on the terrace is large almost as much as the one of the restaurant and it is already furnished with minimal, colorful design piece – we were already anticipating with Jenni long happy hours over the next summer season.

While sipping our fist glass of champagne of the night, we were studying the menu just handled to us. There is a very interesting separate drink list, with classic choices mixed with innovative cocktails’ names. Next to that, an alluring food menu: starters, mains including a wide vegetarian list of proposals and a ceviche bar, desserts, all with classic roots but contemporary mise-en-scene.

I went for salmon as starter and Jenni for scallops – but we ended up having half and half to try both. As main, I chose out of the ceviche menu – even if I was intrigued as well by most of the dishes proposed – the langoustine and pimento ceviche. Jenni had the octopus.

I concluded, ca va sans dire, with a plat of cheese, while Jenni had a matcha cheesecake. During the dinner, I had two glasses of Viognier and one glass of bio red proposed by the waiter with the cheese. We concluded with espresso and a grappa.

Pictures of our dinner and my first impressions regarding Skybar restaurant and bar to follow. 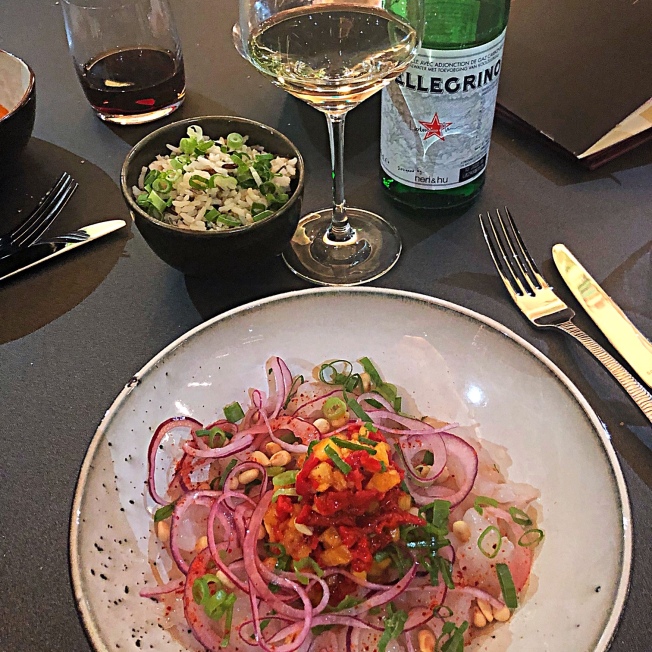 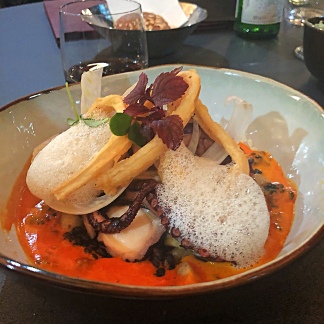 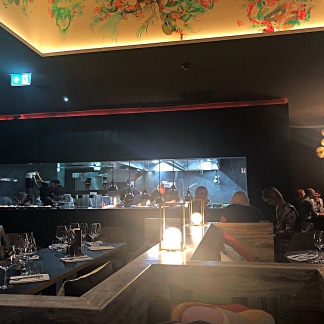 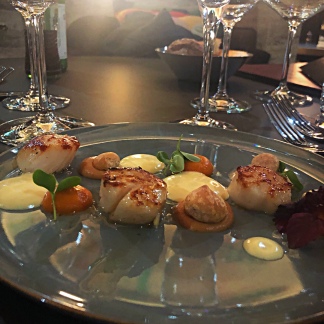 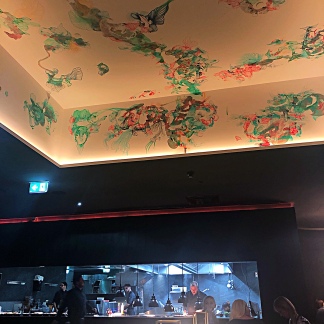 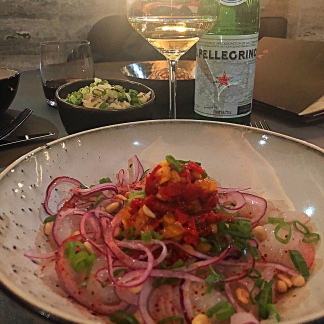 What I loved about Skybar restaurant and bar:

What I liked a bit less about Skybar restaurant and bar:

In conclusion: I believe the Skybar restaurant and bar might be the next place to be in the Luxembourg gastronomic and nightlife scene. The place is perfect to have dinner with friends or a date, before going out, for a celebration, “just because you need champagne”: it is posh, without being formal, the atmosphere is glamorous, the interior design urbane, the service young and fresh. It is definitely a place with a bold personality and an interesting menu, including vegetarian choices. Highly recommended if you fancy something different and new.